Toggle menu
$5 Priority Shipping on all orders for USA only

WE NO LONGER BUILD THESE RIFLES BUT WE DID TEACH LEW BONITZ, GRIZZLY CUSTOMS HOW TO AND HE HAS THEM AS A STANDARD OFFERING ON HIS WEBSITE. https://grizzlycustom.com/product/marlin-336-450-bushmaster-conversion/

If you live in Michigan, Indiana or another state with similar laws, you're well aware of the whitetail deer hunting regulations which limit which rifle calibers you can use.


A change to the 2016 law in Michigan finally allows deer hunters to use certain rifles capable of using .35 caliber or larger ammunition, with a straight-walled cartridge with a minimum case length of 1.16 and a maximum case length of 1.80 inches in the "Limited Firearm Deer Zone" when taking deer. Examples of firearms now legal for the southern part of the state include, but are not limited to, a .357 Magnum, .44 Magnum, .45 Colt, .450 Bushmaster, and .460 S&W.

In response to this change in Michigan law, Randy's Hunting Center got the novel idea to approach Ruger to see if they'd be willing to design a new bolt-action rifle in .450 Bushmaster for the "Limited Firearm Zone." Ruger agreed and designed the Ruger American .450 Bushmaster series of bolt-action rifles that would be sold exclusively by Randy's Hunter Center for the 2016 hunting season (available at more retailers this year). The rifle was a hit with Michigan hunters and hundreds were sold.


Marlin .450 Bushmaster Lever-Action in 2017
A few months back, we had Michigan hunter approach us to build him a precision Marlin lever-action rifle in .450 Bushmaster. He was intrigued by the idea of the .450 Bushmaster cartridge but prefers hunting with a lever-action versus a bolt action rifle. We started with a Marlin 308MX and ordered a Douglas match-grade barrel profiled in .450 Bushmaster with a 24 twist. We chambered and head-spaced the barrel and cut it to 18”. We slicked the action and gave it a crisp 3# trigger along with our Ranger Point night sight and rail on which the customer mounted a Leupold 2-7x scope. Testing at the range, the rifle delivered 1/2" to 3/4" MOA in 3-5 shots at 50 yards.

The customer was more than pleased! Upon picking up his rifle from the local FFL we received the following email, "Just picked up the rifle. WOW! I couldn't be happier, trigger is great, looks great, awesome!” And later, he posted about his new Marlin .450 Bushmaster on the MarlinOwners.com forum to share some feedback and photos with the members - Behold, the Ultimate Marlin.

For this particular Marlin .450 Bushmaster custom built rifle, we had recommended a 308MX as the donor rifle. We’ve since designed new receiver / barrel tools that allow us to also build the .450 Bushmaster on a Marlin 336 30-30, .35 Rem or .450 Marlin rifle. With more than 10 million of these rifles out there, finding a good donor rifle is not only easy but affordable. 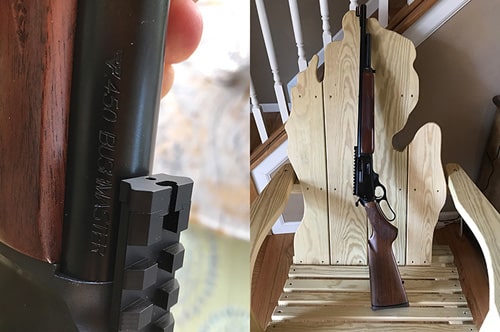 
Michigan's Firearm Restrictions
Certain rifles capable of using .35 caliber or larger ammunition, with a straight-walled cartridge that has a minimum case length of 1.16 and a maximum case length of 1.80 inches and a .35 caliber or larger air rifle or pistol charged only from an external high compression power source (external hand pump, air tank, or air compressor), may be used in the Limited Firearm Deer Zone when taking deer. Examples of firearms now legal for the southern part of the state include, but are not limited to, a .357 Magnum, .44 Magnum, .45 Colt, .450 Bushmaster, and .460 S&W.