A rifle is similar to any other firearm except the construction, which changes the firing position. As it has a long barrel, the shooter needs to prop the rifle against their shoulder for stability while shooting. The grooves along the length of the inside of the barrel spin the bullet, speeding up the velocity and accuracy of the rifle. Hence, the rifle has greater accuracy over a longer distance.

The firing of the bullet from the rifle is initiated with the pull of the trigger. The firing pin strikes the primer, creating a spark that ignites the gunpowder. As the gunpowder burns, it creates an explosive expansion of gas. This forces the bullet to exit out of the barrel at a high velocity.

A loop lever-action rifle has upgraded America’s contribution to the world of firearms. The original 1848 Volition Repeating Rifle was introduced by Volcanic Repeating Arms Company. Subsequently, Winchester Repeating Arms Company, Marlin Firearms, Henry Repeating Arms, Rossi, Chiappa have refined and developed their own long-standing designs. These progressive designs are highly popular and successful to this day. 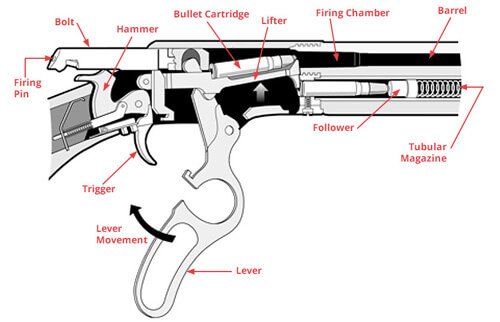 The Marlin big loop lever rifle is a very simple design and hence user-friendly. When the lever gets pulled down, the action moves the bolt and firing pin backward. This ejects the empty cartridge and lifts a new cartridge into the chamber. When you return the lever to its starting position

When you pull the trigger, the hammer strikes the firing pin. The pin then hits the cartridge primer thus setting a series that sends off the bullet to your target.

The principal advantages of most lever actions are speed, reliability, high magazine capacity, and (at least potentially) a good trigger pull. Classic good looks also play a part in the continuing desirability of the lever-action. Some of the advantages of loop lever are:

The lever loop rifles are light to carry. They are easier to handle, both in the woods and from a high seat, thus providing ease in the shooting. It is easier to balance lightweight loop lever rifles. Hunters prefer them for shooting at the short and medium-range of 50 - 150 yards where fast action is required.

As lever-action rifles such as the Marlin 336 big loop lever rifle, have been a popular firearm since the 19th century, they have earned a reputation for being rugged, tough, and reliable over the past many years. Even in the current age of AR-15 and precision bolt guns, lever-action rifles are many times preferred as they outclass others for self and home defense. Lever action rifles are fast, hold plenty of ammunition, and are one of the most reliable action designs ever created.

One disadvantage of the popular lever-action rifles (except the Browning BLR, Winchester 95, and the discontinued Sako Finnwolf, Savage 99, and Winchester 88), is that they are not chambered for high-intensity cartridges and their tubular magazines prohibit the use of conventional pointed (spitzer) bullets. Hornady’s LEVERevolution ammunition line with Flex-Tip spitzer bullets has solved that problem for lever-action rifles with tubular magazines.

In a lever action rifle, when one part of the rifle moves, all other parts have to move in the correct order. Hence if any part of the rifle is not of the right shape and size, or has a manufacturing defect, the whole operation of the rifle may suffer. This additional complexity means that lever-action owners will need to find an experienced gunsmith to service it.

After a few rounds of firing, the screws can tend to loosen up. Blue Loctite can help. Additionally, having spares on hand is a good idea but that can be tricky. Lever-action rifles have yet to upgrade their rifle screws to more modern, and readily available thread pitches. such, finding a replacement screw for one that’s been stripped or lost can be difficult.

The initial loop lever-action rifles were developed for the military due to the ongoing Civil War in America. They were referred to as the original assault rifles. However, its users felt the same were too delicate and fragile for military use. Over the decades, the manufacturers of loop lever rifles have increased manifold with the original design remaining from 100 years ago. The Marlin 336 loop lever, along with all the other models and calibers, is fun and very accurate for hunting as well as other recreational shooting.

What does SBL stand for Marlin rifle?

SBL means ‘Stainless Big Loop’. The SBL designation on a Marlin rifle means that the gun has a stainless steel receiver, barrel, and a big loop lever. Some people really like the overly big loop especially if they have very large hands with or without wearing gloves while shooting, as it provides more space to maneuver. Many others prefer the Ranger Point medium loop lever that doesn’t drag as much when cycling.

The Marlin 1895 is a .45-70 government caliber rifle. It's a great rifle for hunting very big game, such as bear or moose. It's also a popular choice for mid-range target shooting.

What is the purpose of a big loop on a lever-action rifle?

The purpose of the big loop on a lever-action rifle is twofold. First, it allows for easy cocking of the gun with one hand. Second, it provides extra space for the fingers when operating the lever, making it easier to grip and manipulate