Nearly two decades ago, not long after my new bride and I moved to the hilly shores of the San Francisco Bay from the swampy flats of New Orleans, a new friend and fellow motorcycle nut took me on a tour of some of the area’s better riding roads. Among those was Redwood Road, which snaked tightly along the southern crest of the Oakland hills before gliding into Castro Valley. Being new to twisties, I was hopelessly outgunned by my veteran buddy on his smaller, more nimble machine. But I was intoxicated by the experience, and fell in love with Redwood Road, which seemed to me an eight mile stretch of heaven.

For the next eight years Redwood was my favorite haunt, and when I retired my old Honda CB1100F warhorse and bought a new Honda CBR900RR, the combination of me and that extraordinarily capable Honda became untouchable on Redwood. I was fast on other roads, but I owned Redwood. I had put in my time, pushed myself and my machine to the limit, and knew every inch of the rough asphalt. Only the reckless even tried to keep up.

Different time, different place. I don’t ride much anymore, except to take my 9yr old daughter on short jaunts through the neighborhood. Occasionally, I take my sweet little Honda XR250R out to the timber property and boldly cut new trails. But shortly after moving to Texas, Marlins became my passion. Like other pursuits that I’ve been passionate about, I’ve gotten pretty good at this new one.

That obsessive behavior has always brought me success. And why not? You want something done well, you go to the guy who spends all his time trying to do it better. Funny thing is, I’ve never cared about competition. My obsession is its own driver. I still remember my fastest ride on Redwood. There wasn’t a soul around to see it. Oh, I might have passed someone in a blur, but I wouldn’t have noticed. I had my head down, tires sliding, and at the end of it I was panting, and elated, knowing I had been to my–and the Honda’s–absolute limit. That’s my rush. That’s why I spend 70 hours a week at the shop.

Obsessive pursuit of perfection has its moments. Most of the time it’s a process of inching ever closer to the goal, but once in a while there’s a quantum leap. I had one in riding skills when I graduated to that CBR900RR, while at the same time reading Keith Code’s “A Twist of the Wrist.” Put superior technology and new knowledge together, and with some practice, Boom! Quantum leap.

These days my extraordinarily capable ride is a CNC machine–three, actually. Like my Honda CBR900RR they cut with seemingly flawless precision, and will do exactly what you want them to do. CNC machining is superior to manual machining not just because a computer regulates the movement of the mill, but because CNCs have mechanical technology built into them that most manual machines do not. Most manual machines can cut accurately to around .001” (one thousandth of an inch). The best might halve that. Our CNCs have a resolution of .0001” (one ten thousandth of an inch). We’re talking microscopic precision here.

It goes without saying that production firearms don’t get built with that kind of precision. There are too many parts, too many processes that introduce distortion and variation, and at production levels it is simply not cost effective to eliminate them.

When you want a seriously precise long range rifle you either start with a custom action like Surgeon or Defiance, which has been machined to very exacting tolerances, or you bring your factory action to a good gunsmith to have it “blueprinted.” Blueprinting is a rather oblique way of describing the process of improving the tolerances of the rifle. Mating surfaces are faced true, threads are recut precisely and concentric to the bolt, etc. Naturally, a match grade barrel (with bore tolerances of .0001” or better) will be just as precisely mated to the improved receiver.

Remington and Savage actions have long been favored by gunsmiths in this pursuit, because, being round, they can be chucked in a lathe for blueprinting. These days you don’t even need the lathe. Manson Precision makes a set of mandrels, reamers, and taps that will do the job just as precisely without.

Unfortunately Marlins have not been the focus of much development in precision gunsmithing. Given the shape of the receiver, they cannot be chucked in a lathe. There are currently no off-the-shelf tools for blueprinting Marlin actions. This has bothered me for a long time. Call me crazy, but I want my Marlins to shoot as accurately as a good bolt action.

To make matters worse, Marlins have (excepting the “M” platforms) square cut receiver/barrel threads. While square threads can work just as well as more common V cut threads, the method of cutting square threads is definitely inferior. A square thread cutter is necessarily square, unlike the sharply pointed V thread cutter. In the case of 12 tpi Marlin threads the lathe cutter is about .042” wide. No matter what you do, and how good your lathe is, you cannot escape the fact that the cutter will cut its full face width on every pass, like a bulldozer blade plowing through soil. This broad blade tends to create a craggy, uneven thread wall, with imperfections that can be seen by the naked eye.

Imperfections are anathema to accuracy. Combine these barrel thread imperfections with (sometimes gross) inconsistencies inside the Marlin receiver, and it can be a real trick to extract MOA accuracy from these rifles, even with a premium barrel. While I’ve had a lot of success doing it, I couldn’t satisfy myself that we were getting the best possible until I knew those imperfections were eliminated.

I wanted–but could not find–blueprinting tools for the Marlin receiver, and I wanted a more precise means of cutting the barrel threads as well. No amount of pleading got the tools made for me, so I embarked on a year-long quest to make them myself. This was in between a whole lot of other things I was spearheading at RPP, but nonetheless, I gave considerable brain power to the blueprinting project. I researched tool steels and heat treating methods, eventually building myself a small furnace. I made a reamer and facing tool successfully, but still the Holy Grail eluded me. A square thread tap so precise that it could be the one ring to rule them all.

I tried cutting the tool on our newly acquired CNC lathe, but to my dismay I still couldn’t get rid of the bulldozer effect of the square cutting tool, even taking .001” passes at a time. I wanted perfection.

And then I hit on the idea of using a thread milling operation instead of a lathe. New knowledge, superior technology–Boom! Quantum leap. Not only had I found a way to make a near-perfect receiver tap, I’d found a vastly improved method of cutting the barrel threads themselves. I can tell you that even to the layman, the difference between lathe cut square threads and milled threads is readily apparent. The milled threads, being cut .0001” at a time, have no visible imperfections, and no tolerance variations that can be measured with a .0005” resolution caliper. They are, for their short .600” run, a perfect, winding road through heaven.

All of our match grade Marlins now get milled threads and blueprinted receivers. In addition to being more precise, they have stronger chambers and thread unions as well. The process is more time consuming, but far superior to traditional methods. Our competition? Oh, I might have passed someone in a blur, but I wouldn’t have noticed. I’ve had my head down, obsessing.

There is a mathematical construct called an asymptote. I loved it the instant I saw it, and I am not much of a mathematician. I’ve always been half engineer, half artist, and one quarter mathematician. See there? I love the asymptote because it strikes me as an elegant metaphor. Oversimplified, an asymptote is a curve that draws ever nearer, but never touches, a line. As a visual aid, pick a number and divide it by two. Then divide that answer by 2, and that answer by 2, on and on to infinity. Plotted on a graph, the answers keep getting closer and closer to zero, first in a big ski jump curve, then flatter and flatter until you could swear that the line is a flat zero. But it never gets there, just keeps getting closer in smaller and smaller increments.

If the asymptote doesn’t grab you as an elegant metaphor, then I don’t know what. I mean, it’s perfection. We never get there. I’ve made my peace with that, but I still get up at 3am every morning, and spend my day dividing yesterday’s answer by two.

Here's a pretty good illustration of what we can expect with the new blueprinting and threading techniques/tools we're using now. This target corresponds to a just built .45-70 with a match grade Douglas barrel, thread milled and mated to a blueprinted Rem receiver. After the first two warm up/ sight-in shots, the proceeding 5 shots made the elongated hole just under the 1 inch bullseye. The group looks a bit lanky, but bear in mind the .45-70 makes big holes. Measured center to center the group is 1.1"

Bear in mind too, that most new builds/barrels will take several rounds to start settling in, with tightest groups showing after at least a dozen fouling rounds. Even better accuracy comes with extended break-in. This rifle started settling in almost immediately, and there's every indication that it will be a consistent one-holer. I wish we could keep it around to see some long term results, but I'm pretty sure our customer is going to want this in his hands asap. 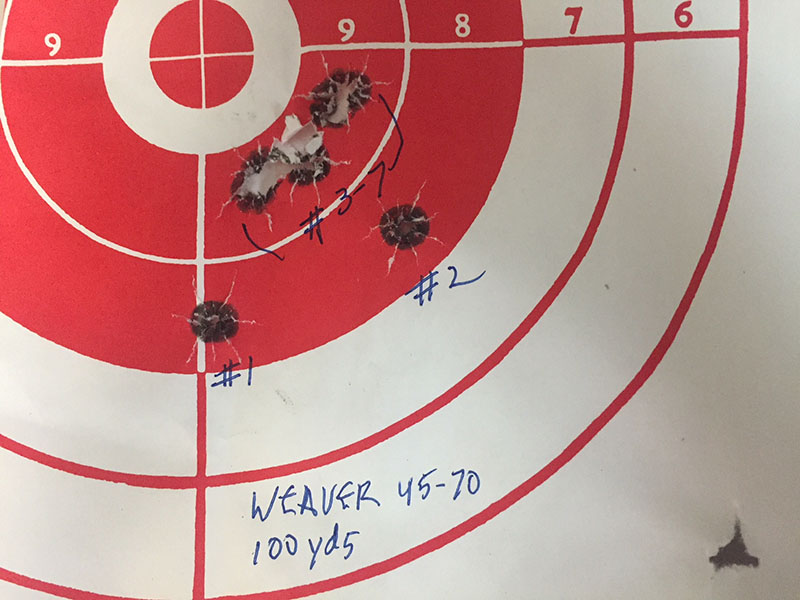